Comedian Jon Stewart had an absolute meltdown after journalist Jack Posobiec approached him to discuss a bill in Congress that would have helped veterans affected by burn pits, until Democrats pulled a last minute ‘blank check’ financial trick to the tune of $400 billion, which GOP lawmakers refused to sign off on.

To recap; Stewart has gone on a campaign against Republicans for shooting down the PACT Act – which they previously supported – before House Democrats tried to slip in a change that shifted $400 billion from “discretionary” to “mandatory” – essentially handing them a giant slush fund. The legislation, if passed, will allow the Department of Veterans Affairs to expand health care services for service members exposed to dangerous chemicals from so-called burn pits, where the military dumped and incinerated toxic waste, including jet fuel. 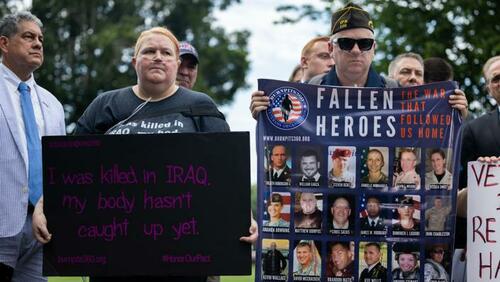 The controversy spilled over to the airwaves this weekend, with Republican lawmakers such as Ted Cruz (R-TX) calling for Democrats to remove the unrelated spending so the bill could get passed, and Stewart completely ignoring the difference.

Literally @tedcruz even said he’d vote for the PACT Act if the Dems take out the $400B in separate spending, and @JonStewart responded by screaming and insulting him

“The difference between mandatory and discretionary…that’s just a word salad that he’s spewing into his coffee cup on his way to god-knows-where,” the comedian then told NBC’s “Meet the Press” on Sunday, adding “At some point we all have to live in reality. And what he’s saying is just factually incorrect.”

Fast forward to Monday outside the Capitol, where Posobiec and the National Pulse’s Raheem Kassam approached Stewart and a group of other protesters.

“Shut the fuck up and listen” Stewart can be heard saying to Posobiec.

So uh, @JackPosobiec and I went to speak with Jon Stewart outside the Capitol. Jack asked some pretty ordinary questions, and Jon began screaming in our faces for about 10 minutes. At one point he was nose to nose with me. I kept trying to calm him down. pic.twitter.com/5C9bxEXTAr

“Over the line…” Stewart later shouts. “People have suffered for 15 years because you’re a fucking troll. You’re a troll. Not in good faith … you’re not in good faith,” the TV host shouted.

“I’m not even against you guys,” Posobiec replied.

Make up your own mind who is “in good faith” here or not. pic.twitter.com/P6cj3tntB5

As Kasaam later notes; “After all the screaming was over, Jon pulled me aside and explained to me that he doesn’t want discretionary spending amendments because it would lead to underfunding. I listened. Before I could reply he walked away. We then spoke with Vets for 45 mins.

At least we can say we tried. @JackPosobiec consistently asked if he could use his platform in any way to bring opposing sides together. Jon just screamed at him. At one point grabbed him. CNN cameras will show only part of this, but I got lots too.

After Stewart’s meltdown, he calmed down and admitted “I lost my temper a little bit, I felt like I was being trolled. And, uh, I realized that the important thing is… just gotta get this done for these guys and get them over the finish line to get the healthcare they need.

I’m here in DC with @jonstewart and @GruntStyle1SG with a message about helping the veterans pic.twitter.com/fdIvBSkRG7

More from Kassam (via the National Pulse):

The post Jon Stewart Melts Down at Jack Posobiec Outside U.S. Capitol — Then Makes Peace appeared first on We Are Change.